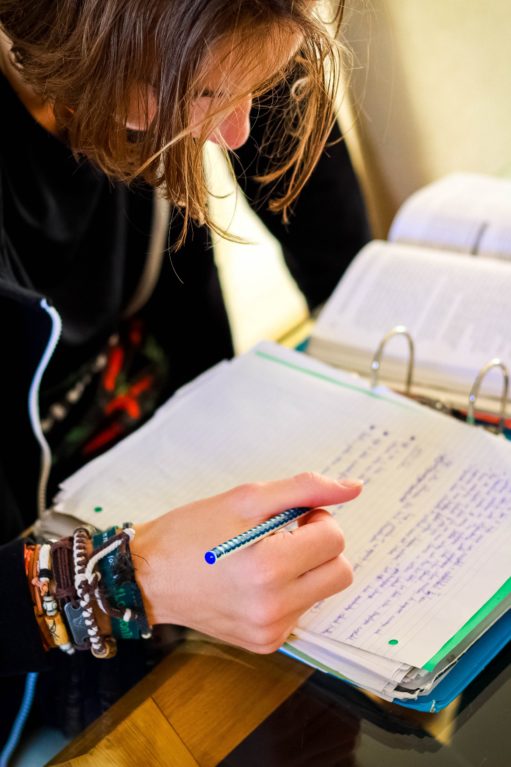 “In my first week at my site I met a student who was known for being troublesome, angry, and never listening or doing his assignments. He constantly swore at the teachers and his peers and refused to work with anyone. I sat with him in art class and showed him some new painting techniques, as well as showing him some of my art work. He opened up to me a little bit, but still had his walls up.

This student has always had a difficult time not getting involved in fights when they broke out in school, I suspect because controlling the situation is his way of coping with his PTSD when it is triggered. One day a fight broke out near the student. I could tell he was agitated and trying not to get involved. I stood next to him and spoke gently to him asking him to please not get involved as he could not afford to get into trouble again. Every time he would lean forward as he was trying to resist getting involved, I would gently put my hand on his shoulder and thank him for not getting involved and tell him that I appreciated him and that he was doing great.

When the fight was finally broken up, he came to my office with me and paced around until he was able to regulate himself again. Once he finally sat down next to me, he really opened up to me and explained his PTSD and the trauma that he has faced in the past. We stayed there and talked for a couple hours before I went with him to the rest of his classes that day to help him stay focused.

Since that day, this student is almost constantly with me doing his work as he finds it easier to focus working one-on-one away from his peers. When he does feel angry, we go for a walk outside and he usually quickly calms down.

For the first time ever in his life he passed all of his classes this last quarter, despite having close to 0% in every one of his classes when I started working with him. We worked together to find alternative projects for him in each of his classes so that he could stay better focused by doing hands-on construction-based projects.  He has been doing better at going to counseling, and he has been much happier at school. He has not been involved with a single fight since I started working on him, and I am honestly so proud of him.

He and a couple of my other students who previously isolated themselves have begun talking in my office during the day and opening up to each other, and even eating lunch together and hanging out after school. He has grown less dependent on me when going to class, and he knows that when he gets agitated in class he can always come work with me, which seems to help him.”