Hi, my name is Fatima Raye Menawa. I am a Junior at Stillwater Area High school in Minnesota, and a member of the Minnesota Youth Council. 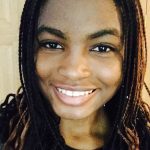 Before I joined the Minnesota Youth Council, I was in a really bad place. So many things were happening in the world that I wanted to see changed, but I felt so restrained by my youth. It felt like I didn’t have a voice or a place at the table where people were making decisions that would affect me, my friends, and youth across the nation. I wanted to speak out and do something, but every time I tried, I felt like nobody listened or I was met with angry and defensive responses.

My school is a great school, but it’s not exactly diverse. Being a Person of Color in an environment where my voice wasn’t being heard and everything I wanted to express isolated me from my peers, was really painful. I wanted to make a change, and for that to happen conversation had to happen. Change comes from learning and educating each other- different communities supporting one another.

I got everything but support.

Soon at my school it was like I was a social pariah. It had happened so fast I didn’t even know it. I would get reports about how people thought I was a “b—h,” and some guy I hardly knew called me an “ugly cunt.”

That kind of treatment really shattered me.  I said I was okay, I thought I was okay. But then I would find myself lying in bed thinking of school and just start crying, and I just couldn’t stop. People would talk to me and I would be so happy to be acknowledged, yet I found I had nothing to say because the notion of speaking paralyzed me.  For a whole year I lived terrified of my voice.

Then I moved from Junior High to High School. Bigger school, new crowd of people, yet I still couldn’t talk, didn’t feel safe. I sat in my classroom and felt exposed.  I’d be among friends was calculating every move I made, analyzing everything I said over and over again before it left my mouth. I stopped talking about things that mattered to me.  But, people starting liking me- I wasn’t an “ugly cunt” anymore, but still felt like one. I was the farthest from myself at that point.

A teacher had introduced me to the idea of joining the Minnesota Youth Council. At the time I was terrified of such a notion. The MYC was everything that I was trying to avoid. I didn’t feel like I had a voice worth hearing, didn’t have anything important to say. I was scared. Yet, I joined, and this year MYC has changed so much. Being surrounded by people who want to see change and be part of it. Teens of different walks of life listening and working with each other even despite having different views. It was so new and amazing and was the first time in so long that I felt like my voice could do something.

Whenever I was at a retreat I would find myself speaking without analyzing. I was fearless because everyone else was. That feeling was empowering, and it’s what gave me the strength to keep on speaking.

MYC taught me that it’s okay to be scared, but it’s the times when you are most scared when you have to stand up. MYC was the Ned Stark to my itty bitty Bran Stark, fresh from what was one of the worst experiences in my life.

At school there is still a lot of resistance, but I’m using my voice to make a change.  I am a part of groups that try to initiate conversation. I’ve been given the opportunity to teach my AVID class for a whole week, about different cultures and issues that they deal with. It hasn’t always worked, but even if just a few students turn their interest into research, that research into knowledge, and that knowledge into expression, then that’s two more people to initiate conversation and spark change. That is what matters and that is what change is about.

I have met a lot of people who do such amazing things and hold such compassion for the world and the people in it. It has changed me in ways I could not have imagined. I have done and will do things that I would not have ever thought possible. I mean, I’m starting a Black Student Union with 3 classmates! The objective of the BSU is to build a community within the school, a safe space for discussions and topics that would otherwise be uncomfortable. I want it to be a place of learning and sharing. Different ways that we’ve already discussed achieving this are through community service, guest speakers, hosting a focused on black history/social issues and ways that people can get involved.

Its surreal how being told that your voice matters and being given a place at the table can change you. I want that change for other youth. I want to create spaces where youth are listened to, where they feel empowered and safe to be different, because that difference is what builds their voice. The Minnesota Youth Council did it for me and I want to make sure it keeps doing it for others who come after me.