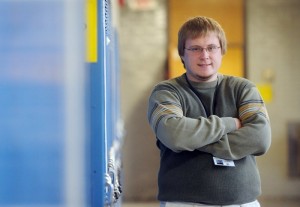 Bridging the gap for students who could otherwise fall through the cracks.

Langseth, who’s been through the Albert Lea public school system himself since the second grade, graduated from Albert Lea High School in 2002.

He received an associate’s degree from Crossroads College in Rochester and attended the University of Minnesota for a few years.

Langseth said he’s also formerly worked at an elementary school, provided child care before and after school, and worked with a teenager with anxiety issues and attachment disorder.

These experiences led him to apply for the AmeriCorps position, where he works with kids directly.

“I decided it would be a good fit for me before I go to college next fall to become a math teacher,” he said.

He’s been in the position for about a week.

The position is made possible through a partnership with the Minnesota Alliance with Youth. The alliance hosts 70 AmeriCorps Promise Fellows across the state.

As an AmeriCorps Promise Fellow, Langseth takes students who need a little push to succeed and mentors them. He also takes at-risk students and takes them to do service projects so they can learn the benefit of this in the community.

However, the crux of his job is to facilitate teachers and volunteers in working with these students.

He’s working with the Albert Lea Thunder in mentoring students and contacts businesses and service clubs to find out who would be good mentors.

The first priority is to help students increase their GPA by 0.5, he noted.

Langseth said a lot of the training he received for the position is in learning how to teach adults how to work with students.

He said the experience will prepare him for being a teacher because it’s a self-driven position.

He doesn’t have a lot of direct supervision, similar to teachers, which allows him to motivate and follow through with himself, he added.

With his mother, Marsha, as the principal of Southwest, it’s also nice that he can go to her with a question or concern.

Langseth replaces Stephanie Pirsig, who was in the position the previous two years.

According to the Minnesota Alliance with Youth Web site, “Promise Fellows are living examples to their communities about what it means to empower our young people to be active, positive change agents.”

They coordinate programs and volunteers to increase the academic success of students needing additional support and leverage resources to effectively utilize tutoring, mentoring, civic engagement, and leadership development for students, the site states.

Aside from his work at Southwest, Langseth also enjoys playing his guitar and playing disc golf.

He said he’s also still involved with Oakwood Church in St. Paul that he got involved with when he was at the University of Minnesota.