Promise Fellow Week Great Stories: A Grade to Dye For 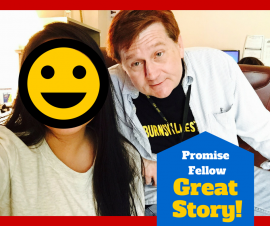 student on my Focus List has made some progress in attendance and core academics … but not consistently, and not without going backward. She can be apathetic to the point of finding breathing too taxing. Her best friend is a decent student, who could do even better if she weren’t self-conscious about being smart. I’ve gotten to know both well … they hear what I am saying and show their own ability to strategize and progress..

My student’s friend scored a low D on her English vocabulary midterm. She needed to do well on the vocab final to protect herself from dropping into the D range overall in the class. We were talking about this, both girls and I. The friend asked what I would give her if she passed the final. I said my heartiest congratulations and be proud of her. She smiled and said: I mean something that matters.

I didn’t blink an eye, and said yes. They suggested pastel colors, really wanting purple. I got them to accept orange … that way I could always be excused for coloring my hair because orange is a primary color of my struggling New York Mets.

She surpassed the 85 mark to score a 94! That score pushed her to a C+ overall … less than a week later she handed in a couple late assignments and sits with a B-. And as I write this, I sit with orange hair.

My student didn’t think I would go through with it, so when they came in the day after the score was posted, she was surprised by my citrusy-looking head of hair. Interestingly, her friend was not surprised. My student said she thought I’d chicken out because I might get teased; her friend said she knew I would because she believed me when I said I would. What surprised her the most was that instead of spraying orange in my hair, or powdering in chalk, I went ahead and used the so-called permanent coloring.

When I asked her why she thought I did the dye instead of something easily washed out, she thought for a moment, and knocked me over with this: Because, you wanted to show us that you are all in. Committed to us, like we need to be committed to ourselves.