That would be lovely 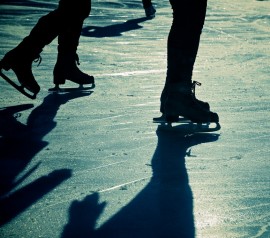 “Yes, that would be lovely,” she said when I asked her if she wanted to go ice skating after school.
She had early release and we had time to kill before we picked up the kids from Harding.
She is an old soul; constantly saying things that fill me with awe.
She is complex; opening up about her struggles with depression and anxiety.
She is so in touch with her culture, so proud to be Native.
She is an activist; she went to Standing Rock and I have seen her at protests downtown, using a camera as her weapon of choice.
I have to constantly remind myself that she is only 15.
She is one of the reasons why I went to Standing Rock because her own stories of her experience there mesmerized me.
She saw me get in the car to leave for North Dakota.
“Take me with you,” she said.
And when I came back I showed her the poem I wrote about it and she told me it was beautiful.
She told me her mom drinks too much and her dad got deported. So did her step-dad. And when he came back from Mexico he wasn’t the same.
So I picked her up from school and we drove downtown St. Paul, myself a little nervous since I haven’t been in ice skates in years.
We got out of the car and paid for the meter.
“I need to tell you something,” she said.
“What?”
“I’ve never been ice skating before.”
So I admitted my own secret and told her we could learn together.
We laced up our skates really tight, just like we were told, and we went out onto the ice.
“By the end of the winter, I want to learn how to ice skate really well.” she said.
After about an hour we were confident enough to race each other around the rink.
It was the slowest skating race you’ve ever seen.
But at least we never fell down.
I won’t let her fall down.
And if she did, I know I’d fall down with her.
By the time we unlaced our skates and I knew our relationship had grown along with our skating skills.
So we went to pick up the kids from Harding and I rapped along to California Love and glanced over to see her putting it on her Snap Story.

[From “Voices From the Field: Reflections from Minnesota Alliance With Youth’s AmeriCorps Members.” Winter 2017.]