The One With the Bike

The one with the bike 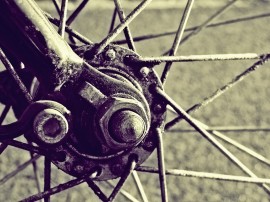 As a Promise Fellow and student, I’m often left with limited downtime and limited resources, so I often look for creative ways to relax. Often, I’m asked, “How do you do all the things?” My usual reply is, “Bikes.” I commute to work, for the community, and to clear my head. It provides a way to stay fit, while taking me places.

One student, in the fall, got all excited one morning when he saw me roll up. “Miss Liz,” he exclaimed, “I ride bikes, too!” We started talking; eventually he asked for help getting different bars. I pointed him to a friend’s shop, and on our way we went.

He’d tell me every day about his bike adventures, however long or short they were; he would describe the birds he saw and the changing weather. Winter finally rolled around.

The student popped his head into our office, appearing slightly sulky.

I reassured him that I had friends who might be able to help!

I have some connections to community organizations and bike shops that were able to jump in and day save. Sunrise Cyclery offered a helmet, while Mr. Michael Recycles Bicycles was able to build a bike for him.

I checked in with the student one day in late February; he noted he hadn’t heard anything yet. I called Mr. Michael, and his bike had been completed! At the end of the school day, I caught up with the student, and told him his bike was done. His eyes grew, appearing as though they were about to fall out of his head. He thanked me; I left him with a note with dates and times of when his mom could pick up his bike.

The next morning, the student came in with his shoulders puffed back, and a confident smile on his face.

And, just as Minnesota’s March is back, so is the student on a bike. He’s gotten back to describing the sounds of new birds, and the smells of spring air. He, too, has found a way to temporarily check out from the busyness of everyday life.

[From “Voices From the Field: Reflections from Minnesota Alliance With Youth’s AmeriCorps Promise Fellows.” Spring 2015.]