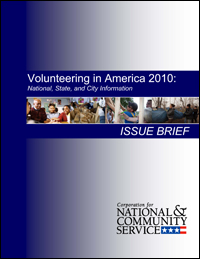 Despite difficult economic times, the number of Americans volunteering in their communities jumped by 1.6 million last year, the largest increase in six years, according to a report released this week by the Corporation for National and Community Service (the Corporation).

The Corporation’s annual Volunteering in America report found that 63.4 million Americans volunteered through a formal organization last year, giving more than 8.1 billion hours of volunteer service worth an estimated $169 billion.

“Americans have responded to tough economic times by volunteering in big numbers,” said Patrick Corvington, the Corporation’s CEO. “What we’re seeing is the depth of the American spirit and generosity at its best. People are turning toward problems, working with their neighbors to find solutions to real problems, from homelessness to the dropout crisis.”